Thank you to everyone who sent such lovely comments about the quilt.
It makes it all worthwhile and I feel a bit like starting another one!

Later on, when it’s stopped raining, I’m going to photograph my new patchwork cushions, so pop back later on when you’ve got a minute.

My friend’s plum tree has been laden with fruit this year.  A bucket of plums arrived on our doorstep and we got cooking!  This is spicy plum chutney. 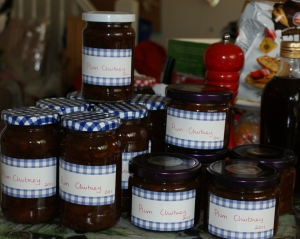 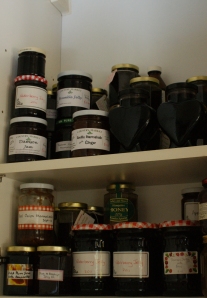 I had to shift jars around to accommodate the 12 chutney jars in the cupboard.  Well, actually only 9, because friends had 2 jars and we had one – I did say that it’s meant to ‘mature’ but it got eaten anyway!

A couple of weeks ago I made Elderberry Jelly and Damson Syrup too.  I just love black elderberries, with cinnamon, cloves and nutmeg – a big dollop of jelly on top of porridge on a winter’s morning is the best way to start the day.

I’m an avid jam maker and keep a list in my recipe book.  Some years I make loads and loads … 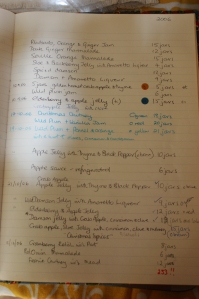 In 2006, I made 253 jars of jam and chutney!  That was Christmas sorted for all friends and family!  I often do mini hampers with jars of homemade preserves – people seem to like them!

The recipe for Plum Chutney …

A bucketful of plums – halved & stoned
Windfall apples – 1/4 of a bucketful – peeled & roughly chopped
Bag of cooking onions put through the kitchenaid
Bag, or thereabouts, of sultanas
3 heads (not cloves) of garlic, dealt with alongside onions
Bottle of vinegar
Large bag of sugar
Handful of cardamoms, crushed with husks removed
Sprinkle of cinnamon
4 star anise
Generous sprinkle of seasalt & black pepper

Cook the fruit, spices & vinegar until – well, until it looks quite cooked.  Then add the sugar (if you add the sugar at the beginning, the fruit won’t go mushy).  I leave mine to reduce for ages, as you can see from the ring around the pan.  I didn’t want this chutney to set, I wanted it to have some thick juices on the plate, to mop up with bread.  Always sterilise the jars at 100 degrees in the oven and fill to the top.  Then top with a waxed disc and seal tightly.  I never ‘follow’ a recipe and make all my preserves by feel, eye & taste!

Occasionally, when I turn out a cupboard, I discover a ‘vintage’ chutney hiding at the back.  We had one from 2002 last month, and it was fantastic.  The flavours had mellowed and matured and everyone thought it was amazing!  If the jar is properly sealed, chutneys will last for years and of course, that’s what preserving is all about – keeping the fruits from the harvest season so they can be enjoyed throughout the year.

There was another bucket of plums outside our door yesterday!  Off we go again …

Please join in and leave a comment - it means a lot to hear from you ... Cancel reply

You are currently reading Jamming around … at Adaliza.