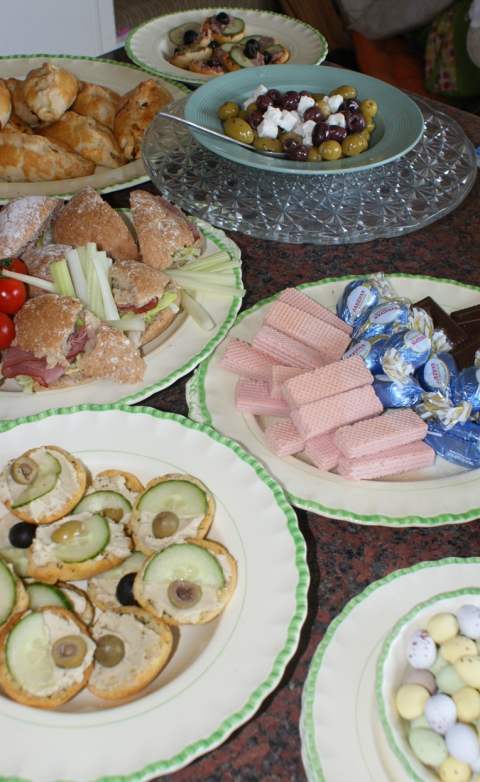 I’ve listed fairy cake and pasty vegetables as you’ll probably have some of them already, as I did when I investigated the back of the larder and veg rack!  Cocktail sticks are also fun though I forgot them and we used our fingers!

Preparing the buffet (morning) all this took me about an hour:

Finishing the buffet – start about an hour before:

Dressing the table – takes about 10 mins:

Feed dog then put dog in charge of ‘defence of kitchen’ (against lightning strikes by hungry boys).  If dog is already full of food then there’s less chance she’ll pinch anything!  Brush hair (mine, not dog), adjust lipstick, remove pinny, change t-shirt and you’re ready to party!

If you’re a good planner, then you could make pasties and cakes well ahead and freeze them.  I only decided to do a ‘buffet’ at about 10 am and then went shopping!  So I’ve written this post so that I can remember roughly what I did and in what order, even though I made it up as I went along!  It all worked out fine, there was plenty for 6 of us.  I made 15 mini pasties and they were all devoured!

I guess it would make a good picnic too if you took the pate in tubs and spread it onto bruschettas as and when – yeah – I feel an Easter picnic coming on!

You are currently browsing entries tagged with finger buffet at Adaliza.