Mirror Mirror (not on the wall) …

but safe in your little wallet in my pocket … 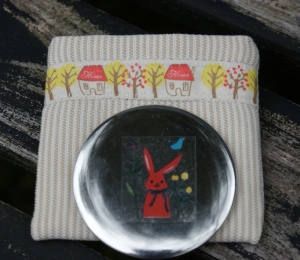 and some suit the boys as well as the girls …

With a map of the capital, depicting some memorable landmarks – these mirrors are suitable for everyone who likes to check they’re tickety-boo!

What do you think?

They’ll be lots to choose from at the first Art Market of the year in Winchester tomorrow (Sunday).  Remember all the car parks are free and it’s set to be a fine day.  Treat your mum to a wander around Winchester in Springtime and choose from the wonderful coffee shops or restaurants for lunch or a pick-me-up inbetween visiting all our market stalls.  There are usually about 100 stalls, all featuring local makers and their wares.

If you’re popping by, I’ll be in my usual spot in the High Street, near Boots (5th down from the top tomorrow) – do say Hello.  If the sun is shining my stall will be reflecting all the mirrored sunlight with patchwork quilts, cushions, teacosies and crochet flower delights on display too!

When all the cows were sleeping
And the sun had gone to bed,
Up jumped the scarecrow
And this is what he said:

When all the hens were roosting,
And the moon, behind a cloud.
Up jumped the scarecrow,
And shouted very loud:

“I’M A JINGLE JANGLE SCARECROW,
WITH A FLIPPY-FLOPPY HAT!

Now go on – you can’t tell me you don’t love scarecrows!

You may remember that I made a scarecrow cushion a few weeks ago and then forgot to pop the memory card into my camera.  Silly me!  That particular scarecrow is crossing the Atlantic very soon, where it will arrive in plenty of time for Christmas! But I don’t have a photo of him (or her)! 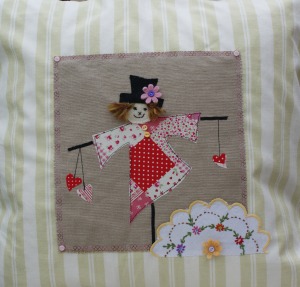 I thought I’d better get busy and run up another one!  JJ Scarecrow will be blowing all the way to Blackmoor Apple Day, down on the farm, in a couple of weeks!

Noticing the mince pies on the shelves at the local store, I also thought that I’d join in with a bit of a frolic in the festive department …

The cheery arrangement of colours seems to work well in this quilt – what do you think?  Traditional reds & greens with snowflakey whites & zingy, vivid blues – all sort of frosty and hot at the same time!  I designed it to fit along the back of a sofa, or over a favourite chair – just to get you into the mood for those long, cosy evenings by the fire!

Today hasn’t been with it’s drama – I knew one would come to get me one day soon, and today was my ‘SCREAM’ day!

I have finally decided to part with my saddle.  It’s been with me for a quite a few years, but to be truthful, will probably never see the back of a horse with me on top.  When I lost Stormy (admittedly he did leave me with an arm full of metal and screws to remember him by), I rather lost my nerve for riding.  Seems logical then, to sell on my saddle if I have no wish to ride.

I ventured into the summerhouse, where my saddle has spent the last few months over the summer and – you’ve guessed – as I was moving a few bits and bobs around a HUGE spider appeared – in a teapot!  The lid was off and this particularly pretty, vintage Sadler (coincidence or what?) teapot positively invited me to pick it up.  I looked inside and SHRIEK/SCREAM!  Argggggghhhhhh …

Both collies dived into the summerhouse, blocking the entrance; husband appeared from the kitchen, though he recognised the pitch of the scream and guessed what I’d found; even Flora quacked loudly and came waddling up the garden to my rescue!  A while later, I returned to the summerhouse clad in wellies and elbow-length leather gauntlets (I’d have worn a forensic suit by choice),  at arms length I picked up the vintage vessel and laid it on its side on the grass – can’t bear to think of poor monster dying in a teapot!

However, a few moments later, I saw Flora with her beak in the teapot and then she gave such shake of her head – all the way down to her tail! Thoughts of wriggling and tickling made me feel quite sick!  Oh dear!  Oh well!!!

PS  Pop over to see Wendy’s Handmade Monday blogspot and see what everyone’s been making.

PPS  Have heard a whisper that my blog has been nominated for an award – pop back and see.  It would be wonderful if you decided to vote for me!

You are currently browsing entries tagged with handmade cushion at Adaliza.