A little of what you fancy …

There’s no doubt that we all miss my Mum. Sometimes it’s an almost physical ache in my heart, whilst on other days there’s a sense of calm when I think of her and all that she gave us – me and my Dad.  Dad continues to amaze me. He’s been down to the depths without her, but he’s as intelligent and strong a character as he ever was. He phoned up the other day and asked me how to make bread and butter pudding – like Mum’s.

So, I thought about how I usually just throw a few bits into a dish and chuck it into the oven and then had to sit down and write him a recipe that I thought he’d be able to use.

I started with a shopping list with some notes – “White bread – better texture with a loaf you cut and slice yourself” and “Milk – blue milk is best.”  I printed it out and sent it off with a Good Luck note.

He phoned the following evening to say that he’d just taken his pudding out of the oven and taken a picture of it! He was so pleased with himself – and I was delighted to think that at almost 87 he’d decided that he fancied some home cooked food and had decided to get on with it and make some!  Mum would have been very proud of him.

It tears my heart sometimes that we live so far away.  I offered him a home here in Winchester, but I completely understand that he’d rather be independent and live the life they chose, in the serenity of the Welsh countryside – his homeland.

I decided this afternoon that I fancied a bit of comfort food too.  Maybe because yesterday’s sunshine has disappeared, maybe – do I have to have a reason? 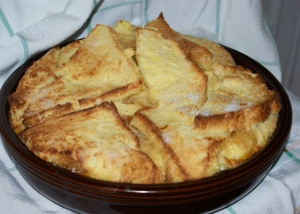 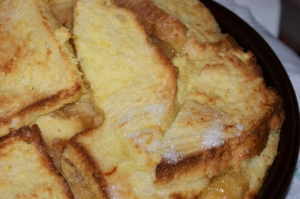 but there was half a loaf of stale bread and this morning I found 4 of Flora’s eggs in a secret nest in the garden, so I was really being thrifty and using up some odds and ends from the kitchen – that’s a good excuse, isn’t it?

Dad loves sultanas in his pudding, I hate sultanas and love marmalade – some that I made a while ago and it never set, and it just oozes through the eggy bread – uuuuummmmmm!

I’ve had one smallish portion and stolen some of the crispy sugary crusty bits from the top, as you do!  Fortunately I’m the only one who likes b&b pud in this house – can you believe that?

I feel much better now – it’s true – a little (bowl) of what you fancy, does you good!

You are currently browsing entries tagged with home cooking at Adaliza.