If you’re hoping for recipes, then look away now – this post is all about WOOLLY WAFFLING!

We didn’t have waffles in Wales, when I was growing up!  It’s a lovely word though, don’t you think?

We had honeycombs!  Another delightful word, to describe truly delicious blankets …

Some of my best honeycomb blankets are still at home with Dad, in Wales, but these two are much used and loved, here in Winchester.

I’m so in love with the texture of these and the warmth is amazing.  They’re huge and quite heavy and I love to have a honeycomb on the bed in the middle of winter – snuggling up under the weight of that wool – oohhh I almost wish it was winter all over again!

I  bought both of them, several years apart, from a local Sunday morning boot sale.  I spied the red one, over the arm of a young woman, as she made her way around the stalls. She’d arrived early and when I sort of bumped into her, accidentally-on-purpose, and admired her purchase, she said she’d bought it as a picnic blanket for a family outing later that day.  I was miffed – I was Sooooo upset – I made her an offer!  I asked what she’d paid for it – about £2 ‘cos it was a bit worn in places, so I offered her £5 so she could go and buy a really nice one!  Surprised, but able to see the plus side, she agreed and IT WAS MINE!

The green one came from the same sale, and was absolutely filthy.  But – it was in fabulous condition (under the dust).

Do you know how to tell  whether a woollen blanket has been looked after?

Apart from the obvious – holes, stains etc, you can always tell a blanket by its fringe.  See how the red one has twisted and gone lumpy? This was probably caused by being washed in too-hot water so felting has started.  Just look at the pure threads of the green and pink fringe – pristine!  I paid £4 for the huge green one and immediately put it onto a cool tumble dry which very effectively blew away all the grubby dust.  The last thing you want to do is wash these – get them dry cleaned, or simply put out on the line in a shower then leave to blow dry and tumble on cool.

On the waffly theme, I saw a picture of a cushion the other day, made from waffle stitch crochet.  Intrigued, I went searching for ideas …

I had a little play about with yesterday’s round cushion, and then played a little more yesterday evening … 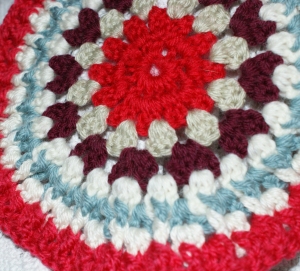 it doesn’t show up very effectively and would probably be best in one colour.  This side is the waffle side with ridges (that don’t show up too well in a photo) but I just LOVE the flip side …

I’m only playing about at the moment and will have a go at the proper waffle in one colour soon, but I’m still using up those ends and waffling on!!!

PS I had some brilliant feedback about a large curriculum subject that I lead and manage today. I don’t blog about my work, but it’s a lovely feeling when hard work and team effort is recognised & rewarded – I’m going to have a Rosy-Glow evening!

Whilst rippling along on the crest of a wave, with Ripple One blanket, I’m acquiring many odds and ends of yarn … 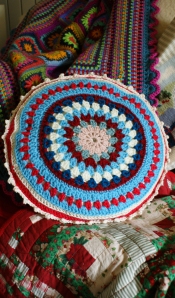 There's Ripple One in the background! 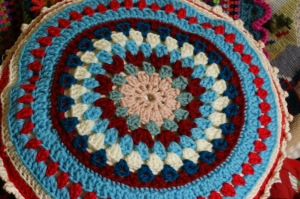 I didn’t have a plan, nor a pattern! I just went round in circles and had a bit of a play about with crocheting ’round the post’ both backwards and frontwards. I found a picture of a ‘waffle’ stitch and apparently it’s quite easy when you get the hang of it, so I wanted to experiment whilst being thrifty and using the ripply ends.  Actually, I had to raid my collection of odd whole balls by the end as it was quite a way round! The brilliant blue is a vintage yarn which is quite heavy in the hand, but it worked in nicely and I think it looks rather like a chunky china plate! I crocheted the back in the geranium pink and made a quick cushion from some old curtain lining and stuffing! It looks sort of homely and vintagey and reminds me of my childhood, though I’m not sure why!

In today’s other news …

Flora strutted down her ramp early this morning in the midst of blinding rain and a gale! She wasn’t at all bothered and made straight for the grass and an exciting slug hunt! She was tapping at the back door by the time I returned home from work this afternoon, and I thought of how apt the saying “water off a duck’s back” as despite the continuing (will-it-ever-stop) weather, apart from a few feathers on her head, she was dry as a could be!

No slugs in here!

Now, Flora has 2 garden ponds to play in but she loves fresh, cold water in an enamel bowl on the patio. Today’s freshen up was straight out of the sky and she loves to have a drink and a wash from her favourite watering hole! 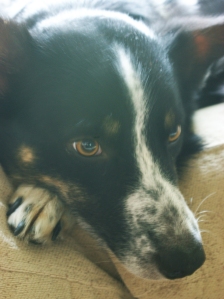 Thought I’d leave you with a couple of collie snaps – Bluebelle (above) is our speckly nosed 4 yr old collie. It was her birthday last week, just as the bluebells came into bloom. She’d moved from ‘my place’ on the sofa to the top of the cushions which is her favourite spot as she can turn around and see anyone walking past the window. I frequently sit with her wrapped around my neck, like a fox fur collar!

Misty, didn’t want to be left out of today’s gallery …

Isn’t she a pretty girl? All grown up and 7 years old, greying a little around her muzzle now – I know just how she feels!

PS – it’s just tipping down again, so perfect weather for a spot of crochet, don’t you think?

You are currently browsing entries tagged with round crochet cushion at Adaliza.